I thought animals had it already and are just immune to it?

The media keeps pushing these weird narratives now that we’re now in the fear and panic news cycle. For example, everywhere I turn, I’m seeing stories about younger people dying. Yes, it’s necessary to point out that younger people are dying from the disease (especially in America, where youngsters think they’re invincible). However, looking at the global stats, the risk to anyone under 40 or so remains the same – something like 0.3%.

… that doesn’t get clicks though.

Reading the alternative news sources, I’m seeing information about global efforts in fighting the disease. Any university in the world with the resources to do so is researching the disease and trying to find ways to defeat it. Doctors around the globe are risking their lives to save others. We aren’t highlighting these things at all. It’s all just silly partisan politics and negativity.

As for the animals in question, both tests were “weak positives,” meaning there was no indication that the virus was actually infecting and replicating inside the animal. Of course, if you take a pet that’s been around its infected owner, when you test their skin and saliva, you’ll find traces of the virus. But, maybe I’m wrong. I saw the story about the cat this morning and they didn’t indicate how the test was performed.

EDIT: Seriously, look at this headline.

Well, they did say the cat was likely infected by the owner and that the risk of cats infecting owners was slim. Plus, it likely started with an animal. Still, I feel for the cats,

I was always the voice of moderation – I closed the last thread for getting too sensational. Moderation and responsibility is key when fighting this.

You are right about headlines… 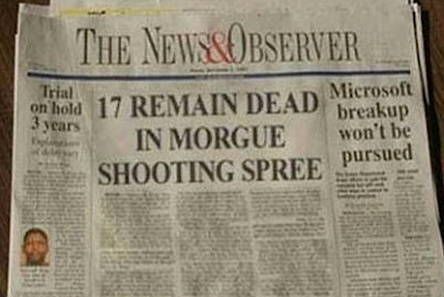 Let’s not get too silly. COVID-19 took 919 souls in Italy yesterday. 769 in Spain. To call this “depressing” is an understatement. But still, everyone should stay focused and stay safe.

Reminds me of that fictional movie contagion i saw about 10 years ago. Media sure does over hype things and gets people to really freak out.

Anyway I was at the grocery store yesterday, somebody sneezed in the aisle, a person was close to him and jumped back fearfully and hit the person behind him, which caused both of them to fall over.

A nother guy that was in line before the store opened ( yes people are camping out over night here at the grocery store, mind you that this store had limits on items to prevent one person from buying everything. It’s not going anywhere. No need to camp out.) was talking all kind of bs end of the world conspiracy crap. Very unnecessary to behave like this.

Let me channel my inner SaintSovereign:

On the other side, more countries are forced to announce curfews and lockdowns because too many people simply don’t seem to care. Several coastal countries have to close the roads to the beach to make it harder for people to go there and enjoy the spring sun. My local parks are filled with bootcamp groups sweating and breathing on one another, touching the same fitness equipment, and it’s not even the people that aren’t allowed to go to the gym.

They reported the first case at my workplace, severe enough that person has been admitted to the hospital.

There, quite enough Saint for me. Back to DarkPhilosopher:

Cool, that means my workplace is likely to extend the work-from-home recommendation!

Oh, and wow, that really sucks, I hope they are gonna be okay.

Note I’m exaggerating here. I may not be the most empathetic person in the world, but I do have compassion.

We are definitely in the middle of two extremes right now. You have people who completely disbelieve this pandemic is happening and others who are going apocalypse.

I am taking preventative measures i can.

They reported the first case at my workplace, severe enough that person has been admitted to the hospital

Wow. Hopefully the person will be ok. We’re you working close to that person?

Nah, don’t even know them, it was on the Intranet. They’ve not been in the office since March 12.

I haven’t been out of the house all week, so I’m going to enjoy my weekly trip to the grocery store this weekend.

It would have been nice if the stores had waived the costs for delivery. Starting at a certain price point obviously. It’s the main reason why I still go to the store.

I have been buying everything i can from lije Amazon that’s cheaper than buying Off the shelf. But all perishables and stuff must buy from the store. I know delivery is expensive. I’m barely working 5 hrs a day right now. No vehicles on the roads. Get out there and drive so i can have some work man

I think when this is over, a few things are going to change. One of which is the media.
Either the media will be held accountable for their doings (Their hands are bloody, bloody, bloody) by ca committee or people will turn away from them by themself.
That is of course, in the best case which I hope for, if people learn from this mess.

This video shows how differently the air spreads when coughing different ways. The visualization was conducted using schlieren mirror Physics of Bauhaus-University Weimar…

I was standing in line around the block today. Turns out stores are now working with the most recent guidelines, meaning 3 people inside a small store, no more than 120 in a large one like the supermarket. Plus everybody is required to have a shopping cart in an attempt to keep the mandatory distance by putting a shopping cart in between you and another person. One popular budget store had those zig-zag lines you see in amusement parks. People ages 70+ get their own dedicated hour where the store is open only for them (I like that initiative).

Today I stood for nearly 15 minutes in the cold, waiting for someone to get a move on inside. Getting my groceries is no more fun…

Instacart for the win. Although, I hear they’re going on strike tomorrow, which sucks because I’ve been relying on it for quite some time.

Honestly, I think if the supermarkets had announced they would be waiving the delivery costs for the time being (provisional on a minimum order size), they would have experienced a massive surge of orders. And as such things go, once people are used to the convenience, they rarely go back to the old way. Unless they are running subliminals telling them to stop being lazy.

Maybe they just have bad strategists, maybe they can’t handle the logistics. I say it’s a missed opportunity nonetheless. We have an online only supermarket that is likely doing amazing right now.

Cirque du Soleil put up an hour-long special to help people through. Always quite amazing.

It’s flu season here, and I took my first flu shot in life.

Is it normal to feel this way?

A flu shot contains the flu, but in a weakened form. It is possible to develop some of the symptoms for a little bit. That’s perfectly fine, your immune system will take care of it soon enough.