Most people problems, all the way down to childhood trauma, can be easily cleared away with an elegant use of Hanlon’s Razor. 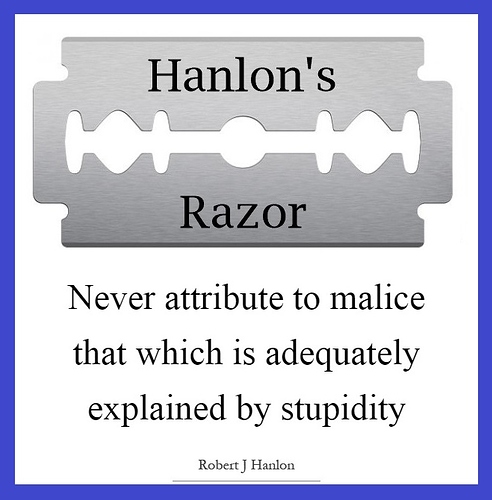 I’ve seen reference to this recently, but the truth is I’ve been saying this myself for so many decades that I can’t bring myself to attribute it to Hanlon, whoever that may be.

My own version is that I always feel that people are not intelligent enough to be evil. Our depth and scope of imagination and perception are so limited that we can barely conceive the consequences of our actions. Even when we think we can it’s still so laughably puny. So, yes, I agree.

Sometimes the right action is to bide your time and cultivate readiness to respond when an opportunity opens.

You don’t just get a great job dropped into your lap. IT TAKES PROACTIVE WORK.

Person 1: Dreams about getting paid more, getting a better job with tons of perks, being able to order takeout whenever he wants and not worry about it. Does nothing about it except dreaming. 10 years later, doing the same work without much of a promotion. Thinks “that’s just the way it is.”

Person 2: Dreams about getting paid more, is unapologetic about wanting to advance in his career. Decides to learn how the game is played at the highest levels. Stops with the negative self-talk (“It’s all about who you know, not what you know” + “I could never get that job because I don’t have the right experience”) and decides to master the SKILL of finding a Dream Job. Six months later, gets his Dream Job, gets a $7,800 raise, and is on track for another promotion in 12 months.

Which one will you be?

A lot of Ultrasonic listening these days.

Today, I’m trying to catch up on a number of work tasks that fell behind. Reviewing and signing some documents that require my signature and/or revisions. With the proposal that I submitted in early March, there was a follow-up task to be done and submitted in the past few days. Got that done. Felt extremely low motivation.

I’m still rolling with Ecstasy of Gold stage 4, Emperor v4, and Inner Circle. Rebirth is there as a transitional stacking module. That was inspired by my thoughts about succeeding as a highly sensitive, introvert. Rebirth is said to help with reframing aspects of yourself that you may have experienced as weaknesses.

It’s been 6 weeks with EoG stage 4. I’m not being relentless with the listening schedule; especially, since I’m planning to stick with this stage until the end of August.

I won’t bother attempting coherence in this post. It is what it is.

One challenge/task now is to balance my current job with my projects to create a better career. My job is fairly demanding time-wise. On the positive side, I work mostly unsupervised and have a high level of autonomy and personal space. The social isolation period, for example, has introduced almost no interruptions to my work-flow other than those caused by my own decisions.

I do a lot of meeting with other people in my work, but that moved relatively seamlessly to Zoom/GoogleMeet. Most days I have 2-3 hours of online meetings. Sometimes more, sometimes less.

I’m about 65% of the way to where I need to be to have a satisfying career life. But I’ve allowed myself to get stuck here. I felt tired and depleted by just maintaining my work. I have managed to fit in other projects. But I’m trying to make it better and more.

For the last 2 or 3 weeks (I think), I found myself using mostly Ultrasonic. Last night and today, masked felt more comfortable again. I think this might be one of those subconscious regulation things that @DarkPhilosopher talks about sometimes. These changes simply felt right.

Lately, I’ve also found that my headphones have seemed to stay in for the whole night, whereas prior to that they seemed to coming out at some point while I was sleeping.

It’s good to feel engaged with the subliminals again.

These Q titles change my meditation timer playlist. Emperor Q is 1-hour whereas the previous Emperor versions were 45 minutes. So, my customary meditation timer for the last couple of months has been The Commander + Emperor v4 + The Elixir. Lasted about 64 minutes.

It was a way to automatically integrate supercharger exposure into my daily routine.

So, for today, I’m trying out a timer which is made up of just one cycle of Emperor Q. I’ll have to decide if I’m going to add in a supercharger or not. I’m thinking of having two alternates. Emperor Q + The Elixir. 69 minutes. and Emperor Q + The Commander 70 minutes.

That’ll mean getting into significant increases in daily meditation time. Not sure how I’ll receive that.
We’ll see.

I’ve just replaced Emperor in all of my playlists, and tomorrow (yes!), I’ll do the same with Ecstasy of Gold.

I don’t know about you, but I’m excited to see what these new babies can do.

One question I have is about the relative potency of the Q titles. I’ve generally aimed for maximal listening times. As close to 24 hours a day as I could manage. With my daily routines, meetings, etc., that rarely works out to the full 168 hours a week. There tend to be periodic interruptions. But it’s still a lot of listening.

I’m wondering if I’ll need to throttle it down with the new Q versions. I’ll just try it out for a few days and remain open to reactions and subconscious adjustments.

I’m glad I waited patiently for Emperor Q. I feel much more attuned to the Emperor goals than to the Stark goals. But I was getting hungry for that updated efficacy.

Fame is like my anti-goal. I want to generate wealth, to be effective, to establish my aspired-to lifestyle, to build that sphere of effectiveness; but I want to DO all of those things, not be known for doing them.

The way I’m wired, fame is an indulgence to be tolerated AFTER the job has been done. Otherwise, it could be a distraction.

My parents bought me a little pen stand when I was a boy that had this quote on it:

Heights by great men, reached and kept,
were not attained by sudden flight;
but they, while their companions slept,
were toiling upwards through the night.

I like that. Not sure how much I’ve managed to do it. But it resonates.

Just want to make a note/time-stamp of it here.

Interestingly, I do experience a kind of smooth, ‘slidey’ feel to it. (I’m only about 14 minutes in to my first listen.)

This is a very short and powerful statement. So true. There’s a huge emotional undercurrent that ties in with that for me but I won’t go into it. It’s cool you were able to capture that in a short phrase

I’m thinking of getting Mogul.

I feel like I could use a more immediate push and inspiration/motivation.

The Q augmentation is making me think it could be a good stacking program.

Are you using rebirthQ? I had massive shifts these past few days. I’m entirely convinced it was rebirth. My opinion but when we feel the need to be pushed by an external force that’s an indication that a part of us is stuck with something from the past that’s preventing forward momentum. I have mine playing after the entire stack so I take in everything I’m going to process and let rebirth hit the past events that trigger the most reconciliation.

Are you using rebirthQ? I had massive shifts these past few days. I’m entirely convinced it was rebirth.

I actually do have Rebirth as part of my stack. I was playing one rep after Ecstasy of Gold and one rep after Emperor. I was listening for four repetitions every day, but lately I’ve been getting two loops every day or two. My stack’s shifting a bit as I transition to the Q titles.

Your strategy sounds sound. Not sure what’s going on in my own mind right now. I feel a lot of things happening, but it’s mostly beneath the surface.

I requested clarity, and I got some.

I am reminded of what I want, and it makes sense.

My previous playlists were based on the loose anecdotal recommendation that a minimum of 6 hours per day should be maintained for a major program. As such I’d aim for 8 loops per day of Ecstasy of Gold. And I decided to keep that same ratio for Emperor.

Inner Circle, I gave about half of that. So 4 loops per day (i.e., 3 hours). Stacking Modules (usually Rebirth and Limit Destroyer), I’d use as buffers between the major transitions in my playlist.

Now, I’m in the process of revisiting both the ratios and my playlist arrangement.

There has not yet been enough time for us to observe the practical fall-out and to see people’s reports of actual changes in their lives. But it still seems clear that the Quintessence-based subliminals are more powerful and concentrated. (They’re also 15 minutes longer for major programs.)

This means that the previous ratios would no longer apply.

Saint estimated that for multi-stage programs the ratio of Q strength to previous-build strength was about 3:1. This might mean that 2 hours of listening could produce the same effect that 6 hours used to produce. Factoring in the difference in track lengths, that would mean that 2 loops of Ecstasy of Gold Q are equivalent to 8 loops of pre-Q Ecstasy of Gold.

Saint also estimated that for single-stage programs (which I’m thinking includes Emperor), the ratio should be something like 6:1. Thus, playing Emperor just once per day would equal or surpass the strength that I used to get by playing Emperor for 6 hours.

I’m reasoning in the dark here because I don’t actually know how any of this is calculated or determined.

I actually get a bunch of simultaneous Limitless Q exposure, because I’m playing it for my son on another device. But now, I’m thinking to include it more intentionally in my own stack.

Okay, so I’ve got my new provisional stack/playlist. Here it is: 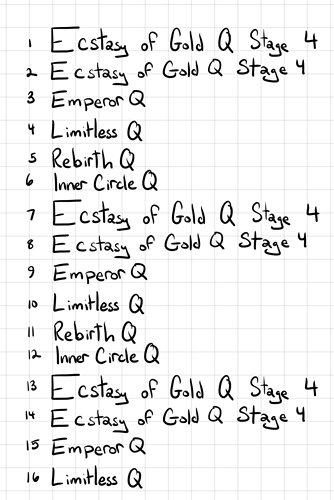 The thing about emperor is that it is like a multistage sub in a single sub turned up to the max.
I mean you have Ascension, sex mastery, mogul, and emperor full scripts in it plus quantum limitless lite and lots of sub modules, plus God only knows what else lol.

The thing about emperor is that it is like a multistage sub in a single sub turned up to the max.
I mean you have Ascension, sex mastery, mogul, and emperor full scripts in it plus quantum limitless lite and lots of sub modules, plus God only knows what else lol.

Emperor’s almost like the fourth stage of one of the multistage subs.

I figure it’s okay either way. My core program is Ecstasy of Gold. So, even if Emperor does not have that 6:1 strength ratio thing and it’s more like 3:1, I think that’ll still give me a good enough amount of input from Emperor. As an added level of insurance, I’m planning to run this stack until the end of August. So that’s another good 4 months.

Thanks for commenting @Floridianninja Any other observations are welcome!