Any effective consultation must be based on sufficiently thorough observation of an existing phenomenon or process. It is the quality of that observation that makes the difference between cliched, empty platitudes and timely, useful support and advice.

Before offering feedback or suggestions, first ask yourself “Am I, right now in this moment, able to have a real-time experience of observing the phenomenon that I am evaluating?“

If you are not, any statements you make should be qualified with regard to your ignorance and probable inaccuracy.

One thing is certain, diversifying one’s playlist/stack just got incredibly easier with the arrival of the Q titles.

I’m thinking about this.

Identify, describe, and analyze your obstacles.

But, this time, not to bemoan your difficult fate in despair; but to plan your way through and around them.

Dispassionately survey the terrain. That’s all it is…terrain. With the right tools, the right map, the right resources and vehicles, you will traverse it.

And leave it behind.

It’s not about becoming someone else. It’s about recognizing and appreciating the greatest aspects and potential of who you already are.

¿ Why are you judging yourself over this arbitrary shit that people just made up ?

Yes, I know there are reasons.

But have a look at what those reasons are.

Take the piss out of them

NEVER allow people who do not believe in you to define the terms of your identity, aspirations, and decision-making.

Review their comments and their views as valuable data (as you would, for example, analyze your training video of a boxing match to identify your weaknesses in technique and to improve your strategy and effectiveness), but do not grant them high-level access.

My comfort zone and my creative center of gravity in this lifetime has tended to be around Spiritual, Artistic, Intellectual/Philosophical pursuits. For better or for worse, those areas come easily.

In interpersonal, political, pragmatic concerns I have always been challenged. Basically in the things of the Material world. In the first phase of my life, I, predictably, disdained those areas and professed to be unconcerned with them. A typically adolescent strategy. Later, I learned how important they were.

But my point here is that had I started Sub Club with Alchemist, Limitless, and Ultimate Artist, I believe I would have had immediate significant and dramatic results.

In October 2018, before learning of Sub Club, I made a decisive commitment to place wealth-generation as a spiritually-informed life priority. It took a while but eventually my ‘preferred’ ‘easy’ areas got me there; got me to that point. I began practices that I believe then led me to the resources here. I began with Ecstasy of Gold. Three months later added in Emperor and the rest is history.

I’ve mentioned some of this earlier.

What I’m expressing now is that I chose to dedicate my first phase of work with subliminals to the Challenge Areas in my life. The areas that do not come easily to me. Conceptualizing. Planning. Taking Action. All of these are more challenging for me around the areas that are emphasized by Ecstasy of Gold and Emperor (and Khan too, for that matter).

This is another reason that my process in this first phase of subliminal work is gradual and requires patience. I’m working in my less practiced areas, my Challenge zones. But this is my priority at this time. I’m working with it and working through it.

I allocated one year of (subliminal) time to this. September 2019 to August 2020. One year. Laying the groundwork with Ecstasy of Gold and Emperor. Even if I’m just taking small steps, I think that the foundations for big, smooth, profound changes are being laid internally.

This one year will not be enough for the full transformation and revolution that I want to drive. I will continue to work on it in this phase of my life.

I do have two very specific projects that are my Ecstasy of Gold/Emperor projects. One feels just about ready right now. The other is a mid to longer-term project. But I move on them pretty tentatively.

I wonder if when I transition to Alchemist, Quantum Limitless (and at some point Ultimate Artist) in my next phase of work, the ease of those areas of my life will intermingle with the foundations that I’m laying now. I think that they may. But I’m open to whatever happens.

3 - Limitless is a secret weapon, and I suspect you might be one of those who could wield it.

It’s quite a bit of time since you first mentioned this, but …
I think I’m experiencing it now. I suspect it’s only going to strengthen.

Actions arise naturally from a combination of

If both of those factors are present, actions will flow naturally. If either is absent, action may be more begrudging.

Everything here is literally just made up.

All that we’ve lived for, died for, struggled against, dreamed of, doggedly pursued, and disregarded.

All just made up.

But to make up and to sustain your own structures of reality takes power and inner stability. Much easier to buy into and support structures that were already here.

These shifting structures of reality are just the ballet of power expressed through form. Of course this includes our very selves.

Recognize this and mock it respectfully even as you navigate these arbitrary arbiters.

Fascinating how so many people around the world experience exactly the same right now.
It reminded me of the infamous and hilarious Jim Carrey interview

It doesn’t really change a thing, but sometimes you’re just compelled to point it out. I think this is probably one of my versions of reconciliation.

It is a very very important part indeed. It is also very freeing

To quote the opening line of one of my favorite songs

" The Great Truth is their isnt one"

When we feel passive and powerless, low in energy, we experience this as a fearful curse; when we are empowered, energized, and engaged, it is a great blessing of opportunity. As a canvas is to a painter.

But most of the time, I’m not very strongly aware of it at all.

This was always one of my favorite chapters from the Dao De Jing (Tao Teh Ching/道德經): 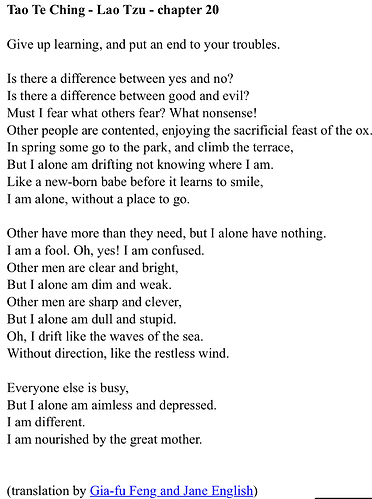 On the other hand, I have a LOT of work to do for job, and the next 10 days will be some real ish.

Hope it opens up soon.

@Malkuth You and me both. I feel like unless I get a grip on this almost crippling anxiety I have that I know is related to unresolved trauma that I will never get anywhere. I was telling someone else that it’s incredibly fucked that I wake up a lot of the time each day wanting to cry.