Informative Thread For Discussing, Elaborating and Expanding on Topics Related to the Unconscious Mind

After writing a few posts here’s another screenshot. I guess the platform shows number of replies rather than number of posts.

Numbers are pretty common for me. 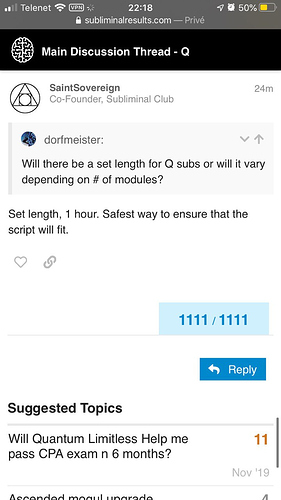 Numbers are everywhere, literally everywhere and I tend to see them when I least expect it in the craziest of places. Subliminal’s can certainly have a great effect on seeing numbers, they’re merely ways for the divine to communicate with fractions of the divine in lower realms.

Any manifestation, when done properly will always cause synchronizations on which numbers are always present. Downloads, upgrades, DNA alterations, visions, insights, any many more things can also cause these numbers. If you’re into this it is important to study the Tree of Life and see where each number corresponds on the tree, eventually you’ll be able to have crystal clear communication with the Divine.

44th post – no coincidences in life, everything is divinely planned. Every action has a counter-reaction and creates a ripple effect through time-space. It’s really simply just follow the Hermetic Principles.

A minute before visiting the forum and reading this post it was 11:44 here in Belgium. No coincidences in life.

Why are there 7 Hermetic principles? Whats so special about 7?

The Seven Main Chakra’s, according to the Seven Hermetic Principles on the Tree of Life (Kabbalah). 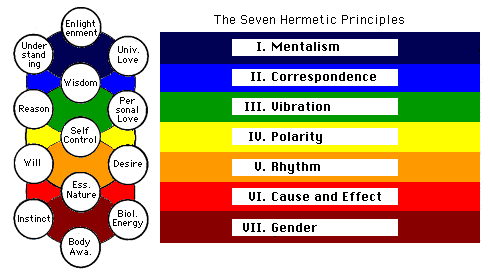 Not to sound like an irritating 5 year old, why are there 7 “main” chakras? Whats so special about 7?

Numbers have significance, right now nothing pops up in my mind to answers that question. I will meditate on it for you, let’s see if I get some answers.

By any chance, have you read The Science Of Psychic Healing by William Atkinson?

I’ve ran Alchemist Stage 1 for >100 loops, and that seems the closest thing to Spiritual Healing, but I find that I’m on diminishing returns with it…

Not to go off-topic once more on the Q Thread, I’d love to elaborate more on this question. I have not read that book, what about it? How come you’ve had diminishing returns with Alchemist and could you specify your answer a little more? I don’t see the problem.

Not even two minutes later an answer arises in Hermit’s mind.

Our entire physical multi-verse is made out of the visible light spectrum as reflected in a rainbow, a rainbow is simply a splitting of the pure Divine white light into their 7 distinct colors. All of these colors have a chakra to process them. Our Universe is held together by love & light, love is feminine while light is masculine, love is magnetic while light is electric. Our sun’s are the electric part that keeps everything energized and living while the love encompasses all.

One thing I have always found a bit odd. I know of the main chakra’s, most people do. They are essentially the main junction points in the energy highways in the human body. The places where all the lines cross. Each associated with a certain property similar to the vibrations located in that area. As to why there are 7 specifically, no idea. Physical bodies were designed to be a certain way I suppose. We can only theorize on that. If we take the rainbow theory, I’d love to find my 8th and 9th chakra (ultra-violet and infra-red).

But in a Qigong exercise I do, I have to pull the energy up to slightly different places: belly button, heart, shoulders, throat, nose, third eye and crown. Any idea what’s significant about those places?

We have many more chakra’s then 7 but there are only 7 main ones, and those seven all relate to a certain Gland in the body. There are many different ways to work with energize, I personally work with the system of Kabbalah and the Tree of Life. Shoulders corresponds to the two pillars, the pillars of mercy and severity. All others you’ve mentioned relate to the chakra’s, besides then the nose.

For more information on the number 7 just ask Snow White and the 7 dwarfs.

Not to sound like an irritating 5 year old, why are there 7 “main” chakras? Whats so special about 7?

Actually there’s nothing special about the number with regards to chakras. Our modern Western system of chakras comes from the translation of a particular chakra system from the 16th century by Arthur Avalon (Sir John Woodroffe). This in itself was based off earlier ideas identified in the 11th century by a number of independent texts. Whereas the modern system is based off a patriarchal lineage the earlier one had distinct matriarchal roots. And there are multiple systems of chakras identified with 5, 6, and even 18 chakras identified.

Whereas the modern system begins with Muladhara (the root chakra), at least one of the earlier systems begins with Sada chakra, the chakra which is non local or located everywhere within the yogin’s subtle body.

Typically the 7 chakra system is based off elemental correspondences - earth, water, air, fire, and space element, with the 6th being a unifying force (eg: ajna). Typical correspondences are muladhara = earth, svadisthana = water, manipura = fire, anahata = air, vissudhi = space, ajna being a special chakra where the two streams of force unite as one (the two petalled lotus which corresponds roughly with the two lobes of the pineal). In modern systems the 7th is the crown, but in earlier systems the non local chakra was the first and connected with the idea of the Great Mother who originates all shaktis.

Some like to think of 7 as 6 around 1 (6 circles fitting evenly around 1, due to the hexagonal packing of space), but this is more of a convenient rather than actual correspondence.

Incidentally, if you’re interested in seeing a scholarly treatment of this, there is an excellent video lecture series by Christopher Tompkins called Chakra Vinnyasa that is floating about the interwebs.

For more information on the number 7 just ask Snow White and the 7 dwarfs.

There it is, people. Your homework (or homefun) is to identify which chakra vibrates with which dwarf:
Bashful, Doc, Dopey, Happy, Sleepy, Sneezy and Grumpy

if you’re interested in seeing a scholarly treatment of this

As I was reading your post, Mind’s Eye already created the image of you in a stuffy sweater and glasses, sitting behind a desk with a bookcase in the background while explaining this to Discovery. Awesome! Thanks for the info.

Not to go off-topic once more on the Q Thread, I’d love to elaborate more on this question. I have not read that book, what about it? How come you’ve had diminishing returns with Alchemist and could you specify your answer a little more? I don’t see the problem

The author says that Spiritual Healing is the highest form of healing, which is in line with your recommendation.

By diminishing returns, I mean I’ve “exhausted” the sub already but feel like I havent met it’s objective based on the description ie “purging of negative energies”

The author says that Spiritual Healing is the highest form of healing, which is in line with your recommendation.

That is a pretty accurate statement, the higher realms rule the lower. Spiritual healing is the most potent and fulfilling healing one can get.

By diminishing returns, I mean I’ve “exhausted” the sub already but feel like I havent met it’s objective based on the description ie “purging of negative energies”

How many months did you run stage one for?

I have literally no experience with Alchemist, neither have I ever read the description until now. From what I can tell it only does spiritual healing in a sense that it cleans and clear negativity from your sphere of sensation purifying negative thoughts and beliefs as a result.

In these 4 months that you used stage one, did you notice and improvements in your state of being, did you experience bliss and positive vibrations, did you feel as if negativity was being cleansed from your life? If this is true then there’s only one following question, did your 4 month experience outweigh all of the negative experiences you’ve had in your life?

I think the Boys of the Board will be okay if on behalf of SubClub I give you my compliments for sticking with it for 4 months without jumping to the next stage. It’s a rare thing to see.

Every stage in a multi-stage program has a trigger that should give you some indication when it is time to move to the next one. Maybe for you, this feeling of being done and receiving diminishing returns is the trigger at work. Remember that Alchemist eventually comes full circle, so by the time you reach stage 4, no matter how far into the future that may be, you’ll get a renewed St1 boost included.

My simple chakra spiel: The seven chakras, seven colors of the rainbow, represent different parts of our being. From the safety of red, grounding, root chakra that connects us deeply to the earth to the highest point violet/white crown chakra that links us to the heavens. During reiki self healing we meditate on the different chakras in an attempt to correct imbalances and increase the flow of energy. There are other points of focus like the ears, kidneys and feet chakras. It’s fascinating to me so I’m trying to absorb as much as I can.

I’d always been curious then had an amazing intuitive massage last year that renewed my interest. Could I maintain the results of reiki mixed with massage on my own. It’s an interesting experiment.

Ears and kidneys come from Chinese medicine and QiGong.

I actually have an anchor to let the Reiki energy balance the energy system. It’s a hand position that I hold for about 30 second to trigger the process. Although I really wish I had a reliable way of measuring my chakras and see if it worked.

Technically your mind is capable of putting you back into a state at any time merely by fully remembering it. The only way to remember is trigger the experience inside yourself. An experiment I would love to succeed at is doing that with a state like what psychedelics do. Imagine taking them once, then freely recalling the state. Hard drug users everywhere would love that idea.