That’s what new beginnings is for

I guess I’ll need to search around because I don’t know what “New Beginnings” is.

So maybe “New Beginnings” is a module in Khan and possibly in EmpV4?

@dorfmeister It is a part of Emperor and 40 days in it is still having its way with me.

I may need to add Emp4 to my stack of Spartan, Primal and PCC as an experiment. Might be too much to stack, but with 15 or 16 hours a day over six months, with the other three tracks already having received several months of listening the results could be compelling.

Maybe I give Emp4 a week by itself before restarting the rest of the stack.

New Beginnings is an at-the-time custom module Saint was running that forced him to deal with a very specific challenge/fear that had been holding him back. It was so heavy he disappeared for weeks. Afterwards, Fire was able to generalize it a bit more and added a “Lite” version to Emperor. I’m guessing it is… confrontational?

Regeneration is more like a nice warm bath massaging the change into you.

Every time I think of New Beginnings I’m imagining the scene from Harry Potter where they have to face the Boggart and defeat it by turning it into something funny.

If you order Regeneration, after checkout you’ll receive a one time offer to get The Elixir at an even greater discount

I bought regeneration …so will I get discount and how much?

I bought regeneration …so will I get discount and how much?

That was a long time ago, the one time offer expired.

What exactly differentiates elixir from limit destroyer and rebirth?

Firstly-this I am certain off
It’s a supercharger not a stack module in build
So ultrasonic with guided hypnosis vs. masked and/or ultrasonic versions

Secondly-This is speculation
Limit destroyer-breaks down internal limiting beliefs-I imagine this is done by acting on the thought-forms, and belief patterns in a more cognitive way.Rebirth restructures/ re-frames your relationship to your own past and who you have been. In the building example, acting in regards to a building and it’s foudnation- regeneration-revamps, rebirth restructures and gives new use, I AM/total breakdown demolishes and rebuilds a sky scraper.

Along these lines Elixer works with regeneration it acts on healing and releasing old issues and traumas gently, not through cognitive structural decimation or re-framing but through channeling healing energy and gentle release of issues it coaxes to surface.

This is why I think Khan stage 1/I am sub will be helpful for me really, since I got nothing out of Regeneration. I think I need stronger subs like those of Khan

Give Blue Skies a shot if you’re doing customs. It is VERY powerful and life changing. In retrospect I may not have given it enough thought.

I say quadpay Khan,
and give stage 1 a shot.
$25 every two weeks for two months. So not such a big commitment

Test that-no need to push through another 30 days of either not getting results or not being satisfied with the awareness of your results imo.

If you decide to get custom though-include Power Awareness

Wait how does quadpay work? $25 for two weeks??

payment split in 4, each installment paid every two weeks.
It’s an option at checkout.

And if the trauma is too strong for you, it will gradually weaken and weaken until it either disappears by itself or you face it.

Does the same apply for the I AM module / Khan St1? Or is it different there? @Fire

Does the same apply for the I AM module / Khan St1? Or is it different there? @Fire

I can’t actually find the original quote, but probably so.

I recognize that quote from the sales copy description for Regeneration.

Yes it is from the sales copy of Regeneration 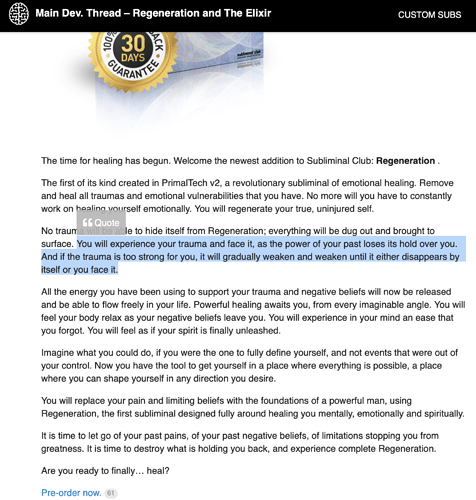 I would guess that elixir is meant to speed up that process. Look forward to seeing how this ultima develops.