Well honestly I was coming to that conclusion anyway as I was wondering why I wasn’t getting the massive results everyone else was getting (I got results, just not major things) and I was starting to wonder why everyone was trying to do NF, SR and all that.

I’m quite oblivious to things and this is an area I’m completely uneducated in so I’m glad it was suggested and made clear that it could be an issue releasing the sexual energy that way.

So this bedtime stack finally happened: 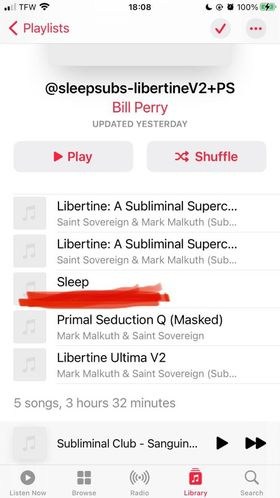 No horniness from wife like on V1. V2 seemed to make her far more cuddly/snuggly while we slept. I’ll try it out a few more times since this my second time overall with it and only the first time in this particular stack style.

Once I’ve seen what both V1 and V2 do, I’ll stack them together somehow to see if/how they synergize.

They could call it ‘Sexual Healing’

Thats interesting i had sex with 3 different women last week and this may have depleted my sexual energy.

@blackadder were you running V1 or V2?

Also were you running your new Ultima custom alongside it?

No i was not i never run them alongside each other.

so the week you slept with all those new woman
were you running Libertine or custom Ultima?

@Azriel was running libertine but these were girls i met while back.

I’m actually wondering now if @blackadder was using OG Libertine lol…or the ultima.
I love V1…still diving in on V2…eager for V3…I’m HOOKED.

I think V2 is better

What about V2 did you find better so far?

The idea that auras cause burn out when used too much rings true to me. I had similar happen with a competitor’s sub (great results at first, followed by burn out). I made a custom that included Primal Seduction (with whatever auras that includes) plus aura of craving, aura of approachability etc. and found a similar thing - great results early on, but at a future energetic cost.

Overuse of auras has caused symptoms of exhaustion for me, things such as decreased gym performance, increased susceptibility to illness, erectile dysfunction, increased need for sleep, increased caloric intake.

I guess it comes down to how much energy you have. If you’re in a calorie deficit, or depressed, or ejaculating frequently, or fighting off an infection - basically anything that uses up energy - the aura will suffer. What really sucks is from my experience (hopefully your results vary), I have this annoying catch 22 where if I use up loads of energy on a really sexual aura, by the time I have put myself in a position for sex, there isn’t enough energy left to get a strong erection and so from your aura she’s expecting an extremely virile sex beast and what she gets does not live up to expectations. It sucks because you would hope that putting loads of energy into a sexual aura would also result in a really high sex drive and strong erection, but in my experience, the two seem to be entirely separate energetic systems and if you give heavily to one, you remove energy from the other.

This is why I think your customization options are really great. Now having learned this, I feel it is better to exclude auras from the subs that are used every day and use the ultimas to create whatever aura you feel you will need when you need it. My new custom only has whatever auric stuff is in Primal and Daredevil, plus an aura of approachability, so hopefully it will be less taxing on the system and more sustainable on a day to day basis.

For Libertine v3, perhaps you could link into some scripting that would limit the energetic requirements of the aura so that it never used up more energy than you would need to then perform sexually. As what’s the point of seducing someone with your aura if you can’t perform when you get them in the bedroom.

I think you are better off going down to the gym or perhaps go jogging and burn yourself out physically.

Yeah that sounds way more fun. Why didn’t I think of that

i have abstained from any form of ejaculatiln for 4 days. I ran libertine at 2 loops today the reactions from women were subtle. Not as strong as before but it was subtle.