It’s so important to find that neutral trait. It’s not just for the sake of ‘feeling good’. It’s about accurately identifying what your nature and characteristics are, so you can set effective strategies that actually work for you.

The most effective career types assessment I’ve taken to date has been the Highlands Ability Battery. Unlike most of these tests, it is not based on self-report. Instead, you (the test-taker) are faced with about 22 or so tasks to be completed within a certain amount of time. Your performance and the times are used to identify your abilities and place them in relation to the population (of everyone else who has taken these tests). So, it’s more objective than many tests. (Although no test is completely objective.). (Also, there are still a few parts that involve self-report.)

Here is my results summary from the Highlands Ability Battery: 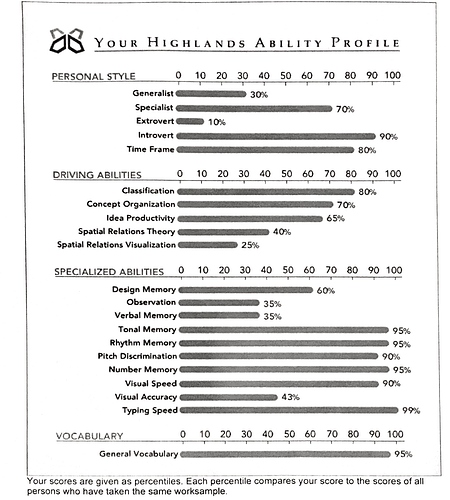 This is not a pass/fail type of situation. A low score on a given index may actually correspond to another strength.

But as I was walking last night, it hit me that what the Enneagram was calling Sloth, Inaction, and Procrastination was probably quite related to what the Highlands Ability Battery labeled as “Long Time-Frame Orientation”.

Time Frame Orientation is said to “measure the span of time you tend to take into account when considering the future. It indicates how you naturally consider the impact of present actions on future plans”.

At about 80th percentile, mine is considered to be a long Time Frame Orientation. It’s said that when thinking about the future, I have a natural Time Frame of about five to ten years.

What the enneagram clarifies about my tendency to inaction is accurate. But what the Highlands Ability Battery points out is also accurate. And the latter is in a sense more neutral and useful. It gives me more options beyond simply: ‘hey! don’t do that.’

I reflected last night on the times in my life when I worked the hardest, with the most energy and focus. I observe that it has almost never been in the service of a short-term, situation-based goal. It’s almost always in the service of a foundational, long-term investment. This goes for my work-style as well. My hardest work is usually ritual- and habit-based. I develop a workout, routine, or regimen based on principles I believe are fundamentally healthy and beneficial, then I lose myself in working on the routine. That’s how I best take action.

I’m not very reactive in the short-term, and I don’t tend to make very rapid judgments based on short-term situational changes.

From someone with a very short-term Time Frame orientation, this style would seem exactly like that of a tree sloth. Climbing up a tree in slow-motion.

I know from past experience, however, that by the time 3 years or so pass by, I’m usually at the same level with the people who started out with me. This means that I need to be more careful about what I choose to undertake. I need to really believe in it. Because in many cases, my natural approach means it’s going to take a while for me to see the fruits.

My point is that if I simply said ‘wow, I’m so slothful’, and was content and satisfied to remain with that observation, I would be neglecting a lot of strategically and tactically important information.

If you’re calling yourself ‘lazy’, in my mind, the actual ‘laziness’ in you is your lack of intellectual investigation to identify what motivates and what your naturally engaged state really is. I don’t believe, in other words, in objective, disposition-based laziness. I believe that some people are not in the proper conditions for their motivational factors to be activated. If they are ignorant of what those conditions are, then they are less likely to seek them out.

On the other hand, anyone who is in close proximity to orin contact with the factors and conditions that motivate them, will automatically work with energy and focus.

This is why it’s hard to find anyone who is so ‘lazy’ that they won’t get out of a bed that’s on fire.

This is the stack.

That will commence my planned stack:

PATHS Terminus
IMBUE Terminus
NAISSANCE Terminus
ELESCE Terminus (only change in this to-date is that I’d like to include Asclepius into ELESCE Terminus. I’ll need to decide which module to remove.) 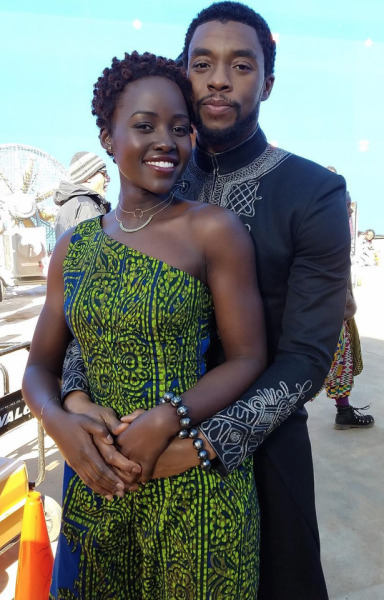 Came home, showered, and just did not go to sleep.

I bought kombucha yesterday on the way home from the walk. Trying to remember if I made the misguided decision to drink it any time past 5 pm. My body needs very little excuse to put off sleeping.

And for more on the personal sharing side, I, who do not usually remember or pay much attention to dreams, had an extremely involved one this past week. Can’t remember if I mentioned it already. Found that interesting.

Weather’s been very hot. Room not getting as cool at night. Probably plays a role.

just finishing up watching a blessing ceremony on Zoom for the new daughter of my younger cousin. Happy and touched. (also happy not to have to regularly attend any church.) But it’s beautiful to see this new person getting held and celebrated by a community. And to see this guy I told stories to when he was 6, now standing as a strong support in his own family.

Used to listen to someone else talking while I walked. It’s an acquired taste. Once you’ve listened to him narrate a few of his books, you just start liking to hear the sound of his voice.

Since June, I probably went through a few months of hearing him talk on his morning walk.

Lately though, as my subliminals stir up the silt of my mind, I find that I’m less interested in listening and more in expressing. In fact, I can really see that the acts of walking and of journaling are a really important part of the process. I think they are probably a really significant factor in attenuating any overwhelming aspects of reconciliation.

So, although I wasn’t planning to go out tonight, I find myself throwing on my shorts and about to lace up my sneakers. (need new sneakers, I think. getting crazy blisters.)

This news was so sad. How much he gave to the world as a legacy while he was battling cancer.

Think of subliminals as a set of instructions for the bodymind to rebuild itself.

Anabolism and Catabolism. Remember that the body is perpetually engaged in construction/destruction projects. Health = Constructing the beneficial and the insufficient. Destroying the harmful and the excessive.

These processes are informed by numerous factors: by the inherent instructions in DNA strands, by environmental factors that communicate demands on the body, by habits and practices that we have developed and internalized.

Building is ceaseless and ongoing.

Subliminals introduce another set of factors that inform how we are being built, how we are shaping this bodymindenvironment complex.

As we internalize the messages and instructions, they are integrated into how building happens; into how construction and destruction proceed.

Right now, from where I stand, the top priority module in the Q store seems like Asclepius.

If you’re healthy and can survive another day/year/decade, there’s hope that other circumstances may turn around.

I’m not planning on building a major custom until next year. But I am currently running Regeneration.

I’m thinking of creating a booster standard Q build custom that will allow me to begin using Asclepius now.

The one window in my current stack where I can squeeze that in seems like Regeneration. A standard build single stage program. I’m just running it once or twice a night most nights for the next 9 months or so.

Was thinking just now that I could build a standard-build custom with Regeneration as the core and Asclepius as one of the modules. If I want it to be super-light, I can add in 8 other modules that are already in my two customs. Or I may choose to mix it up and add in something else. But having Regeneration and Asclepius as the required base modules allows me to begin playing Asclepius without much change to my plan or my current stack.

Thinking about this now.

I changed my first custom just to add Asclepius and remove some overlap in the process.

I changed my first custom just to add Asclepius and remove some overlap in the process.

Did you use a Standard Build or a Terminus Build?

Here are the modules I’ve come up with for this Standard Build Regeneration Booster:

They’re all more or less designed to facilitate Health and Healing.

The idea is to play this as I go to sleep (i.e., how I’ve already been using Regeneration).

@mnemosyne what is your view on using Mosaic?

Terminus has been my constant for all my customs. I put mosaic in everything just in case I end up mixing them with something from the regular store.

I think deep sleep is ok to have but since it’s already in a custom you listen to daily what do you get out of it? Synergy during sleep?

Think the only ones I don’t have out of those is dream traveler and regeneration core.

That was totally just an intuitive move.

Figure I’m listening to it as I go to sleep, so it may just reinforce the message of sleep a bit. Need a bit more help with that.

Same with The Architect. Thinking of it as just one more level of reinforcement.

Hmm…not even sure if that’s necessary. I’ll think it over a bit.

I’m trying to simplify and get it down to 10 modules.

Here @Simon. This one’s for you. 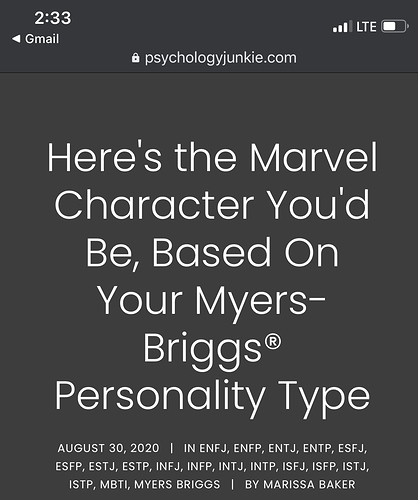 this regeneration sh*t is not playing!

this regeneration sh*t is not playing!

Ya. I hate Regeneration too.

I love my stack more the longer I work with it

One thing I love about exercise is that it’s like being able to choose your own mood.

Love and exercise. Two words I wish went together more easily for me.