When you want to add another subliminal, first take another action instead.

As I walked on tonight’s hike, approximately 2.5 miles in, I heard from across the street the scraping sounds of something being roughly dragged. I looked up and saw a wild boar, emboldened by the cooler weather (and likely sparser food offerings). It was pushing back the slatted wooden fence bordering the park across the street from me. Seeking out the nourishments on offer within a public trash can and some surrounding plastic trash bags.

I was still about a half-mile from my usual destination—more or less the peak of the hill that I typically climb. Residential area, but bordering wilder nature trails.

I decided to curtail my usual route. Basically turned around right there and made my way back home. The guy freaked me out a bit, I’ll admit. Still not quite sure what to expect from them.

A week and a half ago or so, I had a more distant encounter with a porcupine. Amazing how similar those two different animals are in coloring and general appearance. Guess that works well for surviving in the woodland brush of a mountaintop.

Mind’s all over the place right now.

pre-dawn meditation session and then sleep for a few hours.

An ironic step of progress

Today, finally, I ran with no Achilles tendinitis. No Achilles pain.

I’ve now advanced to the point where I am limited by asthma, pulmonary function, and fatigue, rather than by Achilles tendinitis.

Just finished it about 15 minutes ago

It’s taking me where I need to go, where i am already going;

not on some set of instructions read from a book

not the usual kind of book anyway

learning, more so than changing

the walls, borders, and boundaries of fear; of powerlessness and intimidation; that limit how much and what I can handle and take in experientially

so many names and labels we’ve vainly improvised; to pretend that we’ve captured and claimed what can never be controlled

Killing it, freezing it, controlling it, sticking its head on your wall.

Imagine beings as far beyond us–in neural complexity–as we are beyond a cockroach… or a paramecium.

What would be the ethics of interaction with such beings?

this is where we are children.

I just bit the bullet and paid Soundcloud for a month of enhanced access. It’s allowed me to gain access to about 75 old tracks I’d written that got stuck behind a paywall. These are from when I first discovered affordable electronic music production and went crazy constantly creating experiments.

Unmixed, unmastered. But the ideas are there.

I’d forgotten most of these songs. They’re also on a hard drive somewhere, but that is lost at the moment.

Today’s routine is all upside-down.

Got up kind of late and prepared to do morning practices and meditation. Did not activate ‘Do Not Disturb’ on phone. About 10 minutes in, I see an alert on my phone.

It’s my girl! My daughter calling from overseas at uni. She wanted company as she walked. So that happened.

That seems to have set the tone for today. I’m indulging in listening to these old tracks. Did my other practices, but no meditation yet. No work yet.

Is there work to do?

Yes, Yes there is.

I just bit the bullet and paid Soundcloud for a month of enhanced access. It’s allowed me to gain access to about 75 old tracks I’d written that got stuck behind a paywall.

i had the Pro account feature before. Allows unlimited uploads. Then when you let the subscription run out, you can access the most recent 75-100. The rest of your tracks remain there–held hostage. haha. At least they don’t delete them. But the point is to lightly pressure you to keep paying for that level of account.

The primary result that I’ve experienced from Mind’s Eye Terminus2 has been a marked deepening and enhancement of meditation sessions. I don’t really see vivid mental imagery.

Somehow, though, this seems consonant with how my own particular mind seems to work. I’m quite happy with it.

I just bit the bullet and paid Soundcloud for a month of enhanced access. It’s allowed me to gain access to about 75 old tracks I’d written that got stuck behind a paywall. These are from when I first discovered affordable electronic music production and went crazy constantly creating experiments.

Unmixed, unmastered. But the ideas are there.

It was more like 125 old musical sketches and half-tracks.

Listening to them, I hear that they’re mostly in sketch form. They need a bunch more ‘magic’ to make them pop. But I can hear the potential in the ideas. At some point in the future, when I get my situation established, I’ll be running Ultimate Music Producer and bringing many of these ideas to a higher level.

That is an exciting prospect.

But the drums and vocals sound quite flat and muted. One thing I’ll be learning in the future is how to bring life and dynamism to a sound profile.

By the way, the last impetus that finally pushed me to dig out these old tracks was reading a post by @dorfmeister. You said that you used to play mantras at low volume in your home. And I remembered this old version I made of a mantra to Cundi Bodhisattva. Remembered that it was stuck behind a paywall and that was that.

Now I’m just letting them play in the background as I try to work. Not quite cringing. Still like the basic ideas.

I know what you mean. I’ve had similar thoughts about my use of Emperor vs EoG when I initially found Sub Club haha I now have the same thoughts after running my Ascension custom and getting the nudge to start Alchemist; I can only imagine my progress if I had started off with these to begin with!

Taking this reflection from @Rev seriously. Might there be a place for Ascension (or Ascended Mogul) in my NAISSANCE custom in May? Hmm…

That makes a lot of sense. Especially considering how long it is taking me to take any kind of action in building or initiating anything independent.

I find that I tend to get immediate state-change effects when playing Quantum Limitless. It feels like my mind responds to it very easily and quickly. I feel a general optimistic, flowing feeling associated with exposure to this program. (I’m currently on Stage 2. Will take a 10-day break starting on January 1, 2021. Resuming on January 11, 2021.)

Walked over to the store tonight and bought the new sneakers that I’ll use for tomorrow’s walk.

My shoes are officially retired. 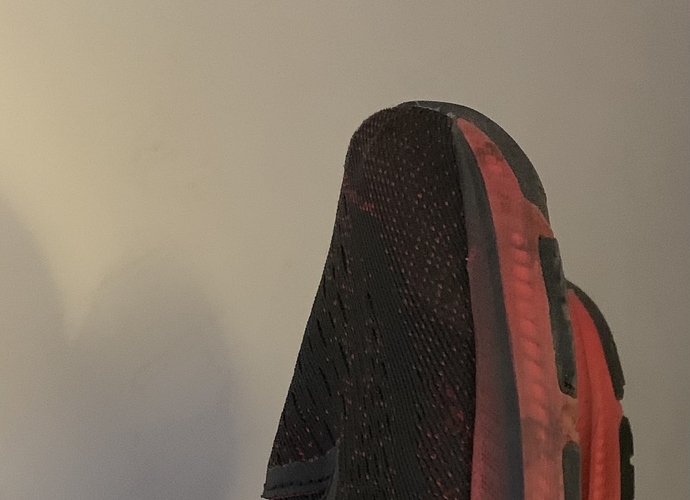 You served me well. Walk on in the Elysian (hiking) Fields.

I’ll admit I haven’t read your journal from the very beginning yet @Malkuth, mostly the latter half from around September.

Might there be a place for Ascension (or Ascended Mogul) in my NAISSANCE custom in May? Hmm…

I see no reason why not to include Ascension in your planned NAISSANCE custom. Please correct me if wrong, but your planned cores are Alchemist ST4, QL ST4, and Mind’s Eye? Given that you don’t have Ascension in any of your other customs(?) and you seem to be able to process lots of subliminal input, it could certainly add some flavour and reinforce the results. I don’t own Ascended Mogul though, so can’t offer an opinion on that!

The longer I run my own Ascension terminus custom (DIVUS), the more I begin to see how important it is for me as a foundational subliminal. I can definitely feel DIVUS interacting with my Alchemist custom therefore I could imagine interesting (and possibly more effective) results if Ascension/Alchemist were working within the same custom.

I had some different modules and strength levels planned for each custom though which is why I personally didn’t do this. Ultimately, I believe that Ascension could positively adapt to ANY subliminal and have good results.

That makes a lot of sense. Especially considering how long it is taking me to take any kind of action in building or initiating anything independent.

This is exactly the same problem I had. In my case, action was becoming less and less as I wasn’t finding true meaning or purpose in my projects (some personal, some business). This hasn’t completely disappeared yet but the progress I’ve made since beginning these customs has been extraordinary.

My internal landscape has now significantly changed however I will admit it is hard to put it down to simply just Ascension or just Alchemist but rather a combination of both, which could be another +1 for including it in NAISSANCE. Alchemist increases my self-awareness and belief of being on the right path and has noticably helped me start becoming my higher Self, while Ascension seems to reinforcing my sense of purpose, self-control and taking action. My customs are at different strength levels and of course have various modules so that could also be a factor.

Hope some of that helps with your decision!

Whoa. Just happened to be wearing my headphones and re-listen to some of those old tracks I’d composed, and it was like night and day. For some it makes the difference between cringe and not-cringe.

I’d forgotten that I’d composed all of these things before I had access to a decent external speaker. I was always wearing headphones. Now it’s like, ‘I knew I’d liked that one more than that!’ Still lots of unfinished ideas though. They generally sound much less flat and muted with headphones. Richer and more three-dimensional. Didn’t realize how much of the work the headphones were doing for me.

One of my next lessons will be to learn how to create sounds that can sound good no matter what they’re being played on. Main trick is probably to compose on a mid-grade external speaker and start from there.