I’m in the middle of the third loop of GLM Q. All I can say is that this is strong shit. I had to lay down a little. This hits even harder than Emp Q. I feel it in my brain and my spine. I think 3 loops is okay for today. I’ll take a break then do 4 loops of EmpQ and call it a day.

It makes you want to be productive and make money but you believe in chakras?

I read this comment as tongue-in-cheek and kind of funny.

But, just in case it was not meant that way: the number of wealthy, famous (and reportedly even despotic) yoga celebs is silent testimony that this worldview does not protect you from any of the human foibles and desires that affect everyone else too.

It makes you want to be productive and make money but you believe in chakras?

I read this comment as tongue-in-cheek and kind of funny.

But, just in case it was not meant that way: the number of wealthy, famous (and reportedly even despotic) yoga celebs is silent testimony that this worldview does not protect you from any of the human foibles and desires that affect everyone else too.

I was in a mood when I wrote it and yeah you’re correct. For some reason it’s always been something I don’t get. Same with people that believe in crystals , essential oils, or conspiracy theories. I can be a bit of a realist if not a pessimist. Meditation is one thing but chakras? Really?

@Malkuth I purchases Quantum Limitless before it was upgraded to Q and I constantly fight myself now because the idea of running it screams existential crisis to me.

There’s a book called The Taboo of Subjectivity by B Alan Wallace. (I’ve only skimmed it.). It’s a kind of epistemological, ‘theory of knowledge’ discussion of the particular conceptual commitments associated with an empirical materialist worldview.

Turns out that no-nonsense view requires as much faith and imagination as any other.

Chakras and similar frameworks are usually based on a phenomenological approach to anatomy. They’re about the body ‘as it feels’ rather than ‘as it looks’.

Sometimes there are interesting neurological equivalencies. You know how you might get righteously angry and we’ll talk about a ‘fire in the belly’ .

Turns out there’s a pretty significant concentration of ganglia and nerve clusters right around that body region, called the ‘enteric nervous system’.

Or you may be a philosophical dreamer and we’ll say ‘ oh, he has his head in the clouds’.

Or you feel great love and compassion and sometimes there will be a kind of special sensation right around the center of the chest.

Stuff like that. Indian antiquity produced some highly driven athletes of contemplative observation who systematically observed the patterns of these types of sensations. They developed these metaphorical maps to try to systematically describe what they were experiencing.

Pretty cool stuff. But at the end of the day ‘meh’, still just matters what you choose to do with it.

So sort of like how it’s been said that the brain can’t tell the difference between a real or imagined experience. Something I read probably twenty years ago when I was a self help book junkie. I guess that could be true if there was enough emotional attachment to the imagined experience.
I look at a lot of what I read in the past in terms of self help as nothing more than ego stroking. Different ways of saying the same shit. It gets incredibly difficult not to be very cynical if not outright pessimistic. 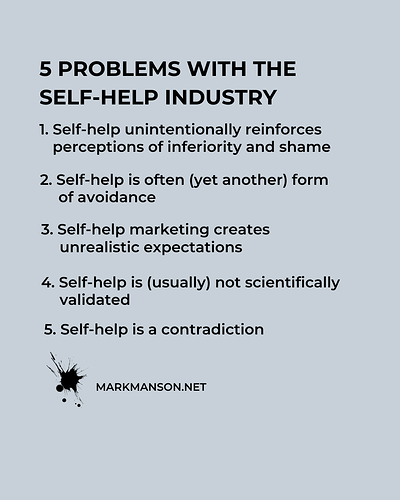 Sort of makes you wonder why I’m here. More existential dread I guess

[I wrote the following pretty quickly. Any missteps in tone or nuance are due to that. please judge it with moderation.]

Not a big problem. Just change ‘Self-help’ to ‘Learning’ and it’s more or less resolved.

And autodidacts are not some type of strange, improbable unicorn. For the most part, they’re just people who enjoy reading books and experimenting.

As far as being scientifically validated, 1) there is significant variance in quality in pretty much every subject and field of endeavor, from personal growth to software development; and 2) as a whole, the various sub-disciplines of scientific investigation are continually changing and revising their own findings and hypotheses. That’s kind of what the scientific method is all about.

As such, science is great for testing propositions and theories, but not so great for establishing new theories/paradigms, and pretty horrible for defining a way of life.

Worship of science is just one more benighted religion. And that’s not very scientific.

I agree with Markmanson.net in general as far as a critique of the worst aspects of the self-help industry, and I think those points are important and need to be made. I also think it’s wise for you to nurse healthy skepticism and mature judgment when it comes to people selling you ‘solutions to life’s problems’ (whether they’re framed as ‘self-help’, religious, or amazing wonders of scientific technology).

But as far as the global enterprise of personal growth and development as a whole, I find those propositions insufficient and inaccurate. For example, even a quick perusal of historical accounts reveals that science is itself a form of self-help. Empirical observation and hypothesis testing are actually the precise standards that can help to keep learning (and other forms of self-help) on track.

But at some point there’s also a need to jump into the abyss and to encounter ideas and phenomena that are new and not yet mapped out. Somebody has to do it. And then the rest of us can come along afterwards, trying to measure it, systematize it, and make sense of it all.

I guess in short I’m saying: we do not know everything. There is A LOT to learn. As a species, we have not encountered almost the ENTIRE universe. Whatever we’ve developed so far, as impressive as it is to us, is based on a very limited and narrow experiential spectrum.

There have got to be many monsters and dead-ends hiding out there in the unknown, but there’s also hope.

@Malkuth I really enjoyed reading your reply and I apologize if I gave the impression I was judging you or anyone else outside of myself. I loved @subliminalguy description of SOS ( Shiny Object Syndrome) in his thread about reconciliation. It applies to self help as well. For me at least it did. For years I would walk into a bookstore and see some new self help book and think to myself " oh shit maybe this will finally be the book, tape, program, or whatever to help me fix all of my problems ". To take something I learned from Mark Manson and reading his book " The Subtle Art of Not Giving A Fuck " there is no such thing as a life with no problems. It’s about having better problems. Which when you think about it comes down to what your values are and what pain you are willing to endure mentally and emotionally and what sacrifices you are willing to make. For reasons I can’t explain I actually believed for some time that I could somehow magically solve all my problems and that I could live the rest of my life somewhat blissfully.
Don’t get me started on science. I have been around enough hardcore atheists to know that relying too much on that can become very cultish very quickly That said I am someone who would rather have tangible information and proof rather than what spiritual or religious folks refer to as faith. Call it a trust issue. I have seen too many people and too many things be so full of shit to put my trust in anyone or anything without good reason

I relate to and agree with all of that.

I had my own self-help journey as a younger person, and I also rejected it all, together with almost everything else.

I see what you mean.

There are so many scandals and examples of lying, abuse of power, manipulation, or just well-meaning deludedness in the ideas and institutions we humans construct. For a while, I gave up on any and all of it. Or tried to anyway. I actually even embraced a kind of anti-intellectualism for some years. (slogan: it’s all bullshit).

On top of that, you also identified a kind of desperation that we, the readers/followers/etc., tend to bring to this kind of work. We want so desperately for someone or something to take the pain away, to take the uncertainty and confusion away. One teacher who I admire pointed out that people who are highly intelligent and competent in other areas of our lives, feel that when we come to spiritual practice, we somehow have to give up any and all critical thinking or sense of intellectual and emotional competence. And there are lots of teachers who capitalize on and even encourage our desperation and our infantilization. (In some cases, it can be a good thing. But it’s tricky. That kind of parent-child dynamic activates a lot of emotional patterns and needs to be used ethically. Personally, I just prefer not to get involved in that kind of thing.)

At this point in my life, I’ve found (or I’m finding) a different way of engaging with teachings, practices, and principles. I am not even interested in looking for definitive, final answers. A good inspiring question is great. Also, experiential methods that can open up spaces for inquiry and growth are great. For now, that’s more than enough for me.

Okay, haha. We’re not talking about Godlike Masculinity Q at all here. Thanks for letting us parley and pow-wow in your thread @Grimm1390.

Okay, haha. We’re not talking about Godlike Masculinity Q at all here.

Today, 2 loops in and it feels almost as strong as it did yesterday. Having a hard sitting still and work on the computer. With this sub, I get the physical sensation that something is going into my brain. You almost feel the information go in.